You are here: Home / Wardrobe / Yes, red! And finished!

So I was all ready to cut the black wool suiting for a dress. Only I didn’t. Again. I don’t know what the problem is. I had a theory that I was lazy except I am not because I spent hours drafting a whole new dress pattern, combining three different existing drafts. Then I thought maybe it’s because it’s a woven and I got so used to sewing knits. Except that’s not the problem either because I made two pairs of flannel lounge pants just a few weeks ago. And then I thought, maybe it’s the color. I need red. Maybe I could sew something red. And so I did. A red denim dress. That turned out to be a wadder. I’m counting the 1.25yds though. And the dress is not in the trash can because I’m hoping to salvage at least some of the fabric. Maybe for a skirt or something. 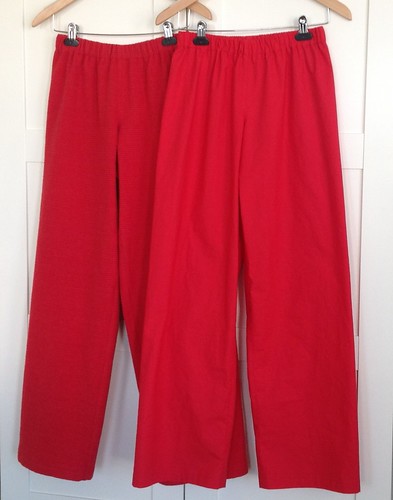 But what started out as a meh week ended on a very productive note. Because since the machines were already threaded with red, I thought I’d continue the red theme. My favorite pair of PJs needed to be replaced and I had just enough red Kona cotton in the fabric collection to make a new pair. And I could also use a new pair of warm lounge pants so I bought this fabulous waffle-weave flannel at Suzzie’s Quilt Shop in Manassas when my sister and I stopped there on Thursday. It is absolutely wonderful – thick, warm, and soft. Here’s a closeup: 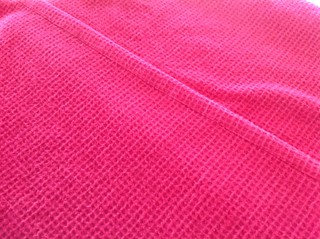 The two pairs of pants together used up 6yds of fabric. (I think this is the secret to winning a stash busting contest – use narrow fabric. The narrower, the better. Because only the linear yards count. Hmmm… how narrow can a fabric go before it’s a ribbon? Hehe) The pants pattern is my TNT, originally for pleated trousers in an old Burda magazine. Obviously, it went through a few iterations to get to the PJs stage.

Speaking of TNTs, I used another one – Jalie Dolman Top to make the next item. I like plain necklines on my winter tops because scarves are my signature accessory. But summer temperatures rarely allow for scarves and then plain necklines look, well… plain. So I figured I’d try this roll collar style – there’s something vaguely 60’s about it and that usually works well for me. It’s just a rectangle the length of the neckline by 8″ plus seam allowances. Easy-peasy. The fabric is a cotton interlock from Nancy’s Notions. I had ordered a yard last year to try it and now that I finally got around to sewing it, I think I’ll order more. It’s soft and smooth, easy to cut and sew, and feels wonderful on the skin. That brings the total sewn so far to 20yds. Not too shabby. 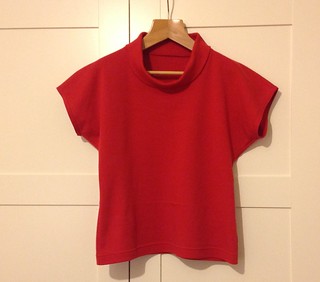 On a more social note, I went to a sewing meetup in D.C. today. That was a lot of fun. It was organized by Nikki whom I haven’t seen since 2003. I got to meet Meredith, Adrianne, two Sara(h?)s, and one other sewing soul whose name escapes me right now. For the fabric swap, I contributed a bagful of fabrics in need of a new home – all but three were adopted. Yay! 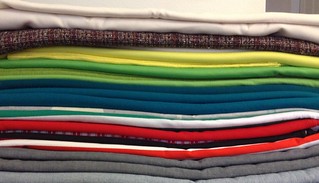 I brought home three new fabrics and two patterns but it didn’t occur to me to take a picture while there was decent light (not that there was much of it on this dreary rainy day) so a verbal description will have to do: one is a purple sweater knit, another a drapey lightweight knit in a beautiful shade of orange, and the third a very cool eyelash fabric in black. I have no idea what to do with this third piece but it had my name all over it so we’ll see.

And that’s all I have today. Happy sewing!