Occasionally over the years, I’ve planned a neat-looking SWAP and even made a few pieces, but I’ve never actually completed the whole thing (as far as I can remember, anyway). The closest I came was in in 2004, when I made three skirts and six/seven knit tops (seven sewn but one was a wadder).  I have photographic evidence, hehe.

This year, I need some basics. Simple shapes, easy color scheme, that kind of stuff. I’m going with red, white, and black. Most of them are already in my fabric collection.

A little bit of analysis of my previous SWAP attempts leads me to believe that my best bet this year is to focus on one silhouette and make multiples of only a few patterns. So, I’ll be making pants – it’s time to update my pant pattern to a narrower leg and adjust the length to somewhere near the ankle so they will work with both heels and flats. I’ll make three pairs: black, white, and red.

To go with the pants, I will make five tank tops: black, white, red, white/black stripe, and white/red stripe. I was completely wintered out by Christmas so all this sewing will be with spring and summer in mind. I am almost always cold so layering is important. That said, I do not like the feel of two sleeves inside one another so my preference is for a sleeveless top with a long-sleeved cardigan. The five tank tops should give me a pretty good start. 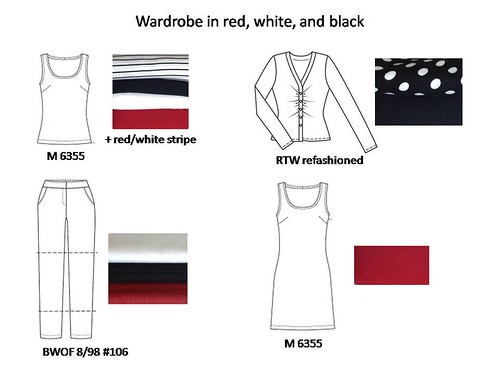 The other three items in the SWAP are wildcards and those will be two cardigans and a dress. The two cardigans are RTW that need a little refashioning. One is solid black, the other black with white polka dots. I plan to cut them shorter, reshape the neckline, and add white trim like I did on the red one. The dress will be solid red and sleeveless.

I am actually going to limit myself to just two patterns – one for the pants and one for the tops and dress (both of these patterns are TNT).  I am hoping this will help eliminate any analysis paralysis so that I can just sew. Let’s see how well it works.