In one of the recent wardrobe posts, I wrote that the wear-at-home side of my closet needed its own capsule. And it does. I’ll spare you the gory details. Suffice it to say that the need is dire and I have taken the first step to fill the gaping hole. I’m thinking two pairs of jeans and 4-6 tops. I’m starting with the jeans because I wanted to try Angela Wolf’s pattern. 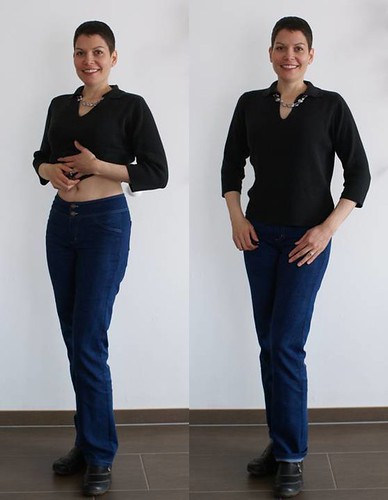 My measurements are between size 4 and 6 so I went with the 6. I wanted a straighter leg so after adding ⅛” to both the inseam and side seam at the knee (to match an old favorite pair), I dropped both seams straight down to the hem. Then I tested it in muslin. Muslin doesn’t stretch so this was a stand-up only pair but it was enough to show what other adjustments were needed:

Then I cut it in stretch denim to make a wearable prototype. That’s what you see in these pictures. For this particular pair, I taped the back yoke to the jeans back piece – there’s no shaping involved, just a straight line, and no grain change either so this was okay and it allowed me to position the pockets higher. I omitted the belt loops because the stabilized curved waistband will stay put without the help of a belt. 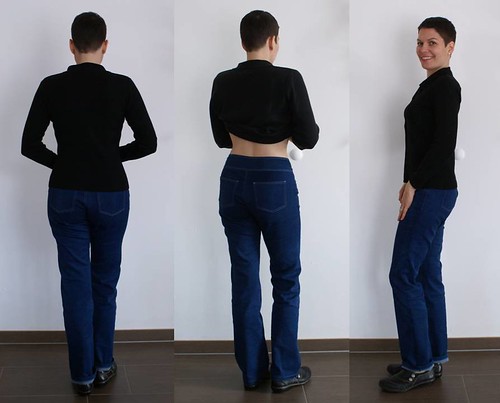 I am not too keen on the amount of wrinkling on the back of the legs. I’ll see if I can fix some of that in the next version. Otherwise, I am pretty pleased. The pattern has very detailed instructions, which I followed almost to the letter. I used regular white Metrosene for both seaming and topstitching. No doubled thread here. I think it shows just fine. The serger was threaded with blue from a previous project so I just used that. I opted for a contrast waistband facing, using the same bright green quilting cotton that lines the pockets and serves as the fly shield. 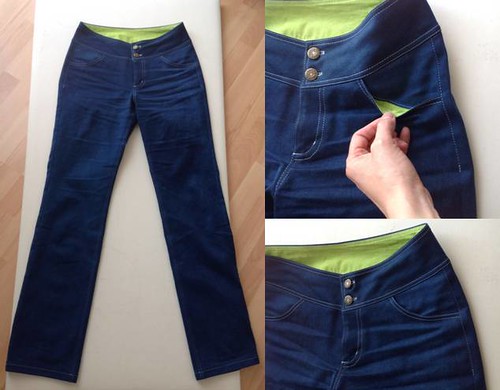 I’m not entirely sure about the stretch denim. It feels weird, how it moves with the body. I think I prefer regular non-stretch denim. There should be a few yards coming in the mail soon. That said, this pair is perfectly wearable for around the house.

There’s so much more I wanted to tell you but the words aren’t coming because my brain is ready for the movers. They’re coming tomorrow. It’s a local move so somewhat less stressful than our usual transatlantic move but still far from fun. I expect to be unpacked and fairly functional early next week. And now I’m off to pack up my machines because I don’t want anybody else’s paws touching them.