The original is much longer but when I looked through the finished projects on Ravelry, I didn’t like how it looked on people in that size. So I made mine shorter. I was going for roughly two feet on the short side so it would cover my shoulder but leave most of my arm exposed. That would give it a nice diagonal line across my body without overwhelming my smallish frame. 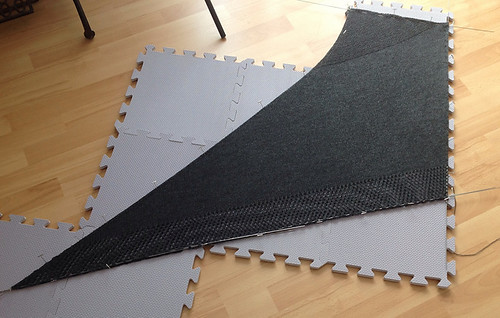 It really has an interesting shape, doesn’t it?

I used two skeins of yarn, with a few grams left over. I could have continued the lace mesh but it’s such piddly work that once I had what I figured was enough length in the mesh, I bound off. I wanted a nice stretchy bind-off and found a really cool one. It’s easy and goes quickly. I’ll be using it again.

Modifications: on the short side, I used a centered double decrease (sl2tog, k1, psso) – it looks much nicer and doesn’t ladder. I only decreased every five rounds to prevent it from becoming a long narrow piece. I don’t want a chimney on my neck. On the long side, I increased by knitting into the center stitch three times: knit through the front loop, place marker, knit through the back loop, and then through the front loop again. This does require that you take the marker off the needles completely in order to knit this stitch but after a few rows you find a rhythm and it’s easy.

*** Update: here are pictures of the increases and the centered double decreases. 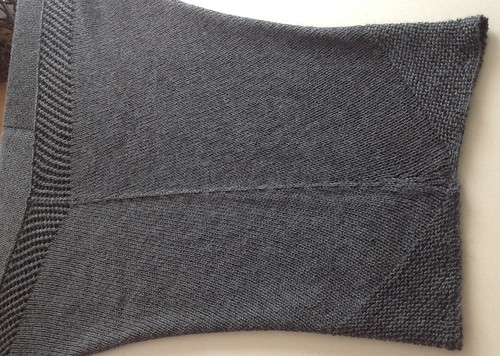 You can see I started out with the decrease specified in the pattern (on the left side of the picture), then switched to the centered double decrease about 15 rounds in. 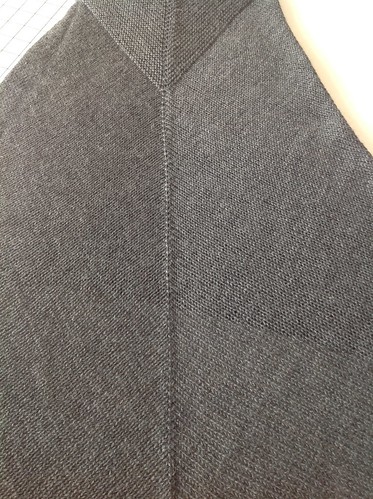 Pretty increases, right? No laddering at all. And it’s so easy too.