You are here: Home / Wardrobe / Dress with decorative seams

Have you guys watched the Craftsy class Decorative seams with Katrina Walker? It’s been sitting in my queue for a while and I finally watched it while knitting the red Viajante. Seriously, knitting and watching Craftsy is awesome! Anyway, I digress. 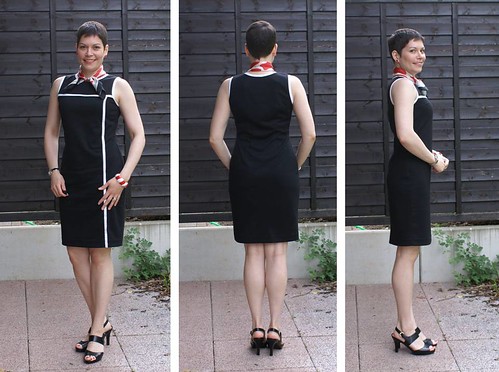 Katrina’s enthusiasm is totally contagious. I mean, I’m knitting and watching and in my mind, I see dresses with all sorts of piping and trim details that I could make. The pattern that comes with the class is Vogue 1329 – a Kay Unger number that looks great on quite a few sewing bloggers. I cut up the pattern sheets and ironed them, and then dithered about making a muslin. In the end, I decided to use my TNT dress pattern (McCall’s 6355) instead. I really just didn’t want to start from scratch. Which is kind of funny because the other day I read Beth’s blog post where she basically says for her, starting from scratch means drafting a new detail and it’s easier to take a new pattern and fit it. For me, it’s the other way around – I’ll hack my TNT pattern six ways to Sunday but if I have to start with a new pattern, well, let’s just say all kinds of stars would have to line up just so.

I used some leftover bias tape to see how these lines would look on me. My approach was very scientific, hehe, standing in front of the mirror in the red dress and pinning the bias tape until I thought it looked right. That was also when I figured out that the armholes would need the contrast trim because it just looked odd without it. Then I put it on the dressform to make it easy to take measurements and such. The pattern work is really simple – just the front yoke and what is essentially a princess line below the yoke on the left side. I also raised the neckline to get a better proportion for the yoke. 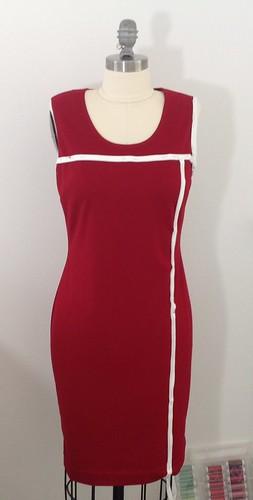 You can just barely make out the white trim pinned to the left armhole.

The fabric is black Sophia double knit from Vogue Fabrics and white Swiss 4-way stretch from Gorgeous Fabrics. The end result is quite sporty looking in my opinion. Totally not what I was expecting – it just didn’t look sporty in my head until I put it on when it was finished. I like that it works well as a summer dress – it doesn’t require a cardigan or anything to give it interest, the white trim does that job. I’m also going to try making the front yoke and the left front panel in a contrast color, like the pattern envelope shows.

And that’s all I have about this dress right now. Next up is a little cropped polka dot cardigan. See you soon!