So the day after my previous post, I injured my left hand and then re-injured it again in the same spot a week later. With a lot of babying, it’s been slowly recovering and I have done only a bit sewing. Not much, but better than nothing, right? 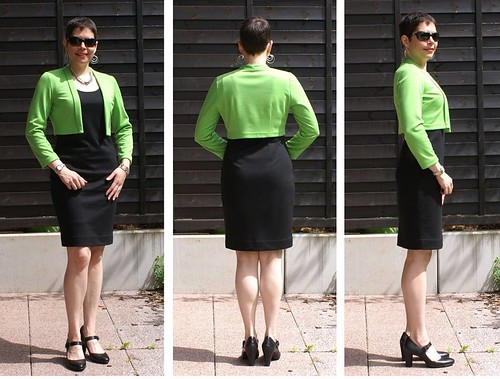 This is my trusty M6355, shortened to the waist. I cut the front straight down from the shoulder point and added a 2″ neckband. It turned out more formal than I had planned so I played with it a bit. Really, this formality gets quite frustrating when you think you’re going to end up with a super casual garment and then you don’t. Anyway, at one point I turned down the band, like you would a collar, and realized that it made it look much closer to the original intended effect. So in the picture above, the band is tacked at the hem and safety-pinned at the center back because I wanted to wear it out of the house to see how it would feel.

I really enjoyed wearing it although I see in the pictures that maybe I could play with eliminating the dart somehow. My mother-in-law also suggested rounding the front edges at the hem. That will make it a bolero though, won’t it? I feel some inner resistance to the bolero, not sure why. (Because I don’t want to look like a toreador?) More so the word than the actual shape, I think. I’ll have to try it.

The fabric is lime green Sophia double knit. It was on hand, I have enough of it (just in case, hehe), and it’s easy to sew. I’ll use the same fabric for the next iteration. I am really determined to make a workable cropped cardigan that will look casual. Watch this space 🙂

I did make two other quick garments in the last few weeks, a pair of pants and a skirt, and I’ll tell you about them next time.